Romance has swept humans off their feet for hundreds of years, as is evidenced by countless odes written by love-struck poets, romance novels, and reality television shows like The Bachelor and The Bachelorette. Whether pining for love in the pages of a diary or trying to find a soul mate from a cast of suitors, love and romance can seem to take us over at times. As we have learned, communication is the primary means by which we communicate emotion, and it is how we form, maintain, and end our relationships. In this section, we will explore the communicative aspects of romantic relationships including love, sex, social networks, and cultural influences.

Much of the research on romantic relationships distinguishes between premarital and marital couples. However, given the changes in marriage and the diversification of recognized ways to couple, I will use the following distinctions: dating, cohabitating, and partnered couples. The category for dating couples encompasses the courtship period, which may range from a first date through several years. Once a couple moves in together, they fit into the category of cohabitating couple. Partnered couples take additional steps to verbally, ceremonially, or legally claim their intentions to be together in a long-term committed relationship. The romantic relationships people have before they become partnered provide important foundations for later relationships. But how do we choose our romantic partners, and what communication patterns affect how these relationships come together and apart?

Family background, values, physical attractiveness, and communication styles are just some of the factors that influence our selection of romantic relationships.[1] Attachment theory, as discussed earlier, relates to the bond that a child feels with their primary caregiver. Research has shown that the attachment style (secure, anxious, or avoidant) formed as a child influences adult romantic relationships. Other research shows that adolescents who feel like they have a reliable relationship with their parents feel more connection and attraction in their adult romantic relationships.[2] Aside from attachment, which stems more from individual experiences as a child, relationship values, which stem more from societal expectations and norms, also affect romantic attraction.

We can see the important influence that communication has on the way we perceive relationships by examining the ways in which relational values have changed over recent decades. Over the course of the twentieth century, for example, the preference for chastity as a valued part of relationship selection decreased significantly. While people used to indicate that it was very important that the person they partner with not have had any previous sexual partners, today people list several characteristics they view as more important in mate selection.[3] In addition, characteristics like income and cooking/housekeeping skills were once more highly rated as qualities in a potential mate. Today, mutual attraction and love are the top mate-selection values.

In terms of mutual attraction, over the past sixty years, men and women have more frequently reported that physical attraction is an important aspect of mate selection. But what characteristics lead to physical attraction? Despite the saying that “beauty is in the eye of the beholder,” there is much research that indicates body and facial symmetry are the universal basics of judging attractiveness. Further, the states that people with similar levels of attractiveness will pair together despite the fact that people may idealize fitness models or celebrities who appear very attractive.[4] However, judgments of attractiveness are also communicative and not just physical. Other research has shown that verbal and nonverbal expressiveness are judged as attractive, meaning that a person’s ability to communicate in an engaging and dynamic way may be able to supplement for some lack of physical attractiveness. In order for a relationship to be successful, the people in it must be able to function with each other on a day-to-day basis, once the initial attraction stage is over. Similarity in preferences for fun activities and hobbies like attending sports and cultural events, relaxation, television and movie tastes, and socializing were correlated to more loving and well-maintained relationships. Similarity in role preference means that couples agree whether one or the other or both of them should engage in activities like indoor and outdoor housekeeping, cooking, and handling the finances and shopping. Couples who were not similar in these areas reported more conflict in their relationship.[5]

Although romantic love is considered a precursor to marriage in Western societies, this is not the case in other cultures. As was noted earlier, mutual attraction and love are the most important factors in mate selection in research conducted in the United States. In some other countries, like China, India, and Iran, mate selection is primarily decided by family members and may be based on the evaluation of a potential partner’s health, financial assets, social status, or family connections. In some cases, families make financial arrangements to ensure the marriage takes place. Research on marital satisfaction of people in autonomous (self-chosen) marriages and arranged marriages has been mixed, but a recent study found that there was no significant difference in marital satisfaction between individuals in marriages of choice in the United States and those in arranged marriages in India.[6] While many people undoubtedly question whether a person can be happy in an arranged marriage, in more collectivistic (group-oriented) societies, accommodating family wishes may be more important than individual preferences. Rather than love leading up to a marriage, love is expected to grow as partners learn more about each other and adjust to their new lives together once married.

When most of us think of romantic relationships, we think about love. However, love did not need to be a part of a relationship for it to lead to marriage until recently. In fact, marriages in some cultures are still arranged based on pedigree (family history) or potential gain in money or power for the couple’s families. Today, love often doesn’t lead directly to a partnership, given that most people don’t partner with their first love. Love, like all emotions, varies in intensity and is an important part of our interpersonal communication.

To better understand love, we can make a distinction between passionate love and companionate love.[7] entails an emotionally charged engagement between two people that can be both exhilarating and painful. For example, the thrill of falling for someone can be exhilarating, but feelings of vulnerability or anxiety that the love may not be reciprocated can be painful. is affection felt between two people whose lives are interdependent. For example, romantic partners may come to find a stable and consistent love in their shared time and activities together. The main idea behind this distinction is that relationships that are based primarily on passionate love will terminate unless the passion cools overtime into a more enduring and stable companionate love. This doesn’t mean that passion must completely die out for a relationship to be successful long term. In fact, a lack of passion could lead to boredom or dissatisfaction. Instead, many people enjoy the thrill of occasional passion in their relationship but may take solace in the security of a love that is more stable. While companionate love can also exist in close relationships with friends and family members, passionate love is often tied to sexuality present in romantic relationships.

Social networks influence all our relationships but have gotten special attention in research on romantic relations. Romantic relationships are not separate from other interpersonal connections to friends and family. Is it better for a couple to share friends, have their own friends, or attempt a balance between the two? Overall, research shows that shared social networks are one of the strongest predictors of whether or not a relationship will continue or terminate.

Network overlap refers to the number of shared associations, including friends and family, that a couple has.[11] For example, if Dan and Shereece are both close with Dan’s sister Bernadette, and all three of them are friends with Kory, then those relationships completely overlap (see Figure 7.3 “Social Network Overlap”). 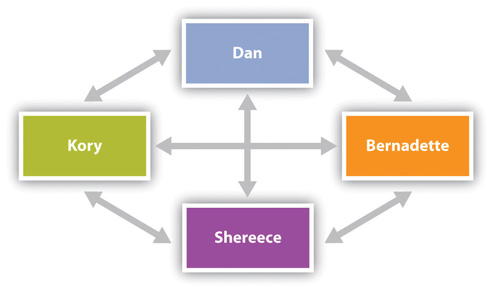 Network overlap creates some structural and interpersonal elements that affect relational outcomes. Friends and family who are invested in both relational partners may be more likely to support the couple when one or both parties need it. In general, having more points of connection to provide instrumental support through the granting of favors or emotional support in the form of empathetic listening and validation during times of conflict can help a couple manage common stressors of relationships that may otherwise lead a partnership to deteriorate.[12]

In addition to providing a supporting structure, shared associations can also help create and sustain a positive relational culture. For example, mutual friends of a couple may validate the relationship by discussing the partners as a “couple” or “pair” and communicate their approval of the relationship to the couple separately or together, which creates and maintains a connection.[13] Being in the company of mutual friends also creates positive feelings between the couple, as their attention is taken away from the mundane tasks of work and family life. Imagine Dan and Shereece host a board-game night with a few mutual friends in which Dan wows the crowd with charades, and Kory says to Shereece, “Wow, he’s really on tonight. It’s so fun to hang out with you two.” That comment may refocus attention onto the mutually attractive qualities of the pair and validate their continued interdependence.

It is becoming more common for people to initiate romantic relationships through the Internet, and online dating sites are big business, bringing in $470 million a year.[14] Whether it’s through sites like Match.com or OkCupid.com or through chat rooms or social networking, people are taking advantage of some of the conveniences of online dating. But what are the drawbacks?

Interdependence and relationship networks can also be illustrated through the theory of triangles (see Figure 7.4 “Theory of Triangles”), which examines the relationship between three domains of activity: the primary partnership (corner 1), the inner self (corner 2), and important outside interests (corner 3).[15]

All of the corners interact with each other, but it is the third corner that connects the primary partnership to an extended network. For example, the inner self (corner 2) is enriched by the primary partnership (corner 1) but also gains from associations that provide support or a chance for shared activities or recreation (corner 3) that help affirm a person’s self-concept or identity. Additionally, the primary partnership (corner 1) is enriched by the third-corner associations that may fill gaps not met by the partnership. When those gaps are filled, a partner may be less likely to focus on what they’re missing in their primary relationship. However, the third corner can also produce tension in a relationship if, for example, the other person in a primary partnership feels like they are competing with their partner’s third-corner relationships. During times of conflict, one or both partners may increase their involvement in their third corner, which may have positive or negative effects. A strong romantic relationship is good, but research shows that even when couples are happily married they reported loneliness if they were not connected to friends. While the dynamics among the three corners change throughout a relationship, they are all important.

States that people with similar levels of attractiveness will pair together.

An emotionally charged engagement between two people that can be both exhilarating and painful.

Overall stable and consistent affection felt between two people whose lives are interdependent.

Interpersonal Communication Textbook by Anonymous Publisher is licensed under a Creative Commons Attribution-NonCommercial-ShareAlike 4.0 International License, except where otherwise noted.