Around the world, the workforce is becoming diverse. Regardless of your gender, race, and age, it seems that you will need to work with, communicate with, and understand people different from you at school as well as at work. Understanding cultures different from your own is also becoming increasingly important due to the globalization of business. In the United States, 16% of domestic employees were foreign born, indicating that even those of us who are not directly involved in international business may benefit from developing an appreciation for the differences and similarities between cultures.[3] In this chapter, we will examine particular benefits and challenges doing international business, and of managing a diverse workforce. We will also discuss ways in which you can increase your effectiveness when working with diversity.

Before we move into these discussions, however, we need to spend time understanding what is meant by “culture” and “intercultural communication.”

According to Lustig and Koester (2010), “culture is a learned set of shared interpretations about beliefs, values, norms, and social practices, which affect the behaviors of a relatively large group of people” (p. 25). Thus, when thinking about culture, it is helpful to remember the following :

The iceberg (shown in Figure 7.5.1), is a commonly used metaphor to describe culture and is great for illustrating the tangible and the intangible. When talking about culture, most people focus on the “tip of the iceberg,” which is visible but makes up just 10 percent of the object. The rest of the iceberg, 90 percent of it, is below the waterline. 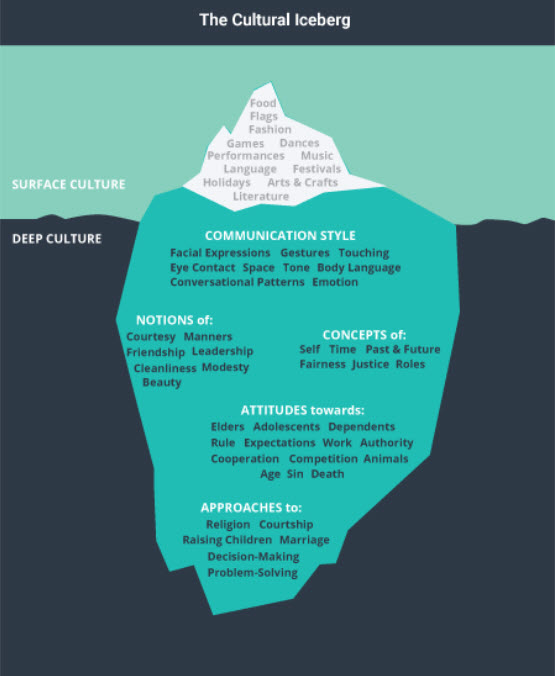 Figure: The cultural iceberg (by Laura Underwood), adapted from Lindner (2013)

Many business leaders, when addressing intercultural situations, pick up on the things they can see—things on the “tip of the iceberg.” Things like food, clothing, and language difference are easily and immediately obvious, but focusing only on these can mean missing or overlooking deeper cultural aspects such as thought patterns, values, and beliefs that are under the surface. Solutions to any interpersonal miscommunication that results become temporary bandages covering deeply rooted conflicts.

In addition to learning a culture, we also learn how to interact in what some refer to as co-cultures or social communities. These are groups of people who live within a dominant culture yet also belong to another social group or groups that share values, understandings and practices.

Thus, we will use the term intercultural communication to refer to “communication between people and groups of diverse cultures, subcultures or sub group identifications.” (Jandt, 2016, p G-4)

Organizational Communication by Whatcom Community College is licensed under a Creative Commons Attribution 4.0 International License, except where otherwise noted.