In the last three decades, inflation has been relatively low in the U.S. economy, with the Consumer Price Index typically rising 2% to 4% per year. Looking back over the twentieth century, there have been several periods where inflation caused the price level to rise at double-digit rates, but nothing has come close to hyperinflation.

Historical Inflation in the U.S. Economy 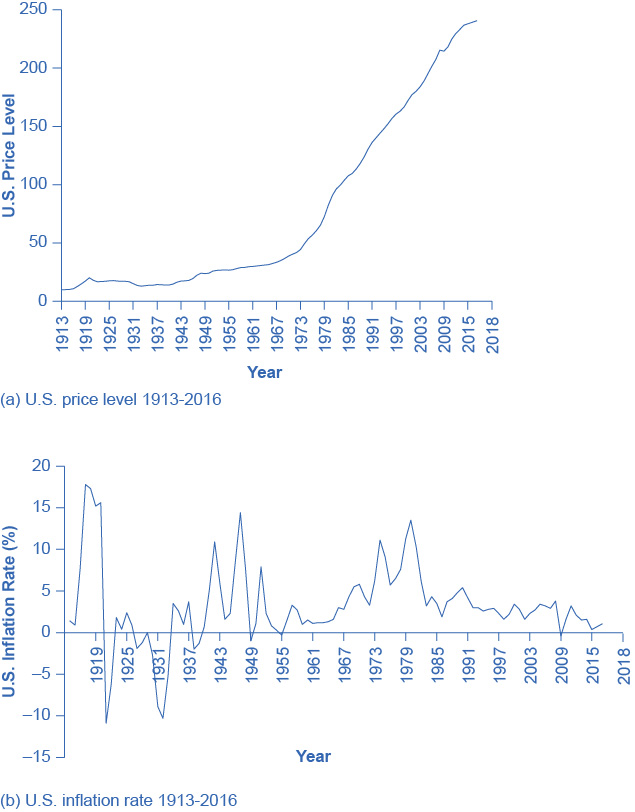 Visit this website to use an inflation calculator and discover how prices have changed in the last 100 years.

Times of recession or depression often seem to be times when the inflation rate is lower, as in the recession of 1920–1921, the Great Depression, the recession of 1980–1982, and the Great Recession in 2008–2009. There were a few months in 2009 that were deflationary, but not at an annual rate. High levels of unemployment typically accompany recessions, and the total demand for goods falls, pulling the price level down. Conversely, the rate of inflation often, but not always, seems to start moving up when the economy is growing very strongly, like right after wartime or during the 1960s. The frameworks for macroeconomic analysis, that we developed in other chapters, will explain why recession often accompanies higher unemployment and lower inflation, while rapid economic growth often brings lower unemployment but higher inflation.

Inflation around the World

Countries with Relatively Low Inflation Rates, 1960–2016
This chart shows the annual percentage change in consumer prices compared with the previous year’s consumer prices in the United States, the United Kingdom, Japan, and Germany. 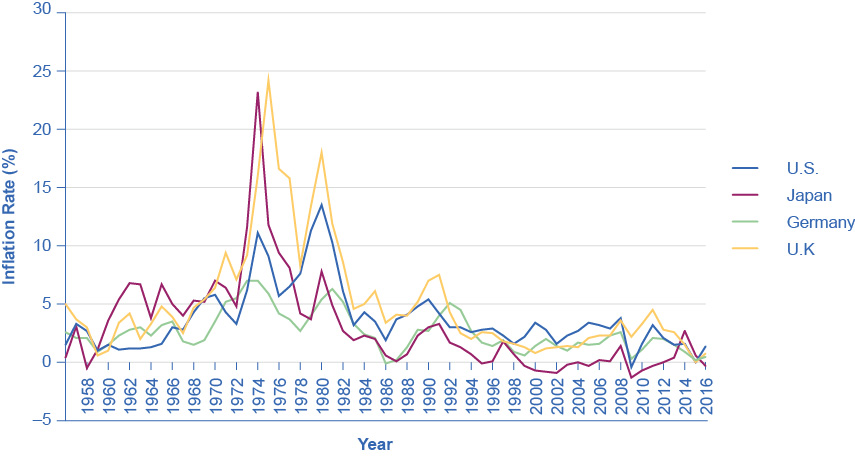 Countries with controlled economies in the 1970s, like the Soviet Union and China, historically had very low rates of measured inflation—because prices were forbidden to rise by law, except for the cases where the government deemed a price increase to be due to quality improvements. However, these countries also had perpetual shortages of goods, since forbidding prices to rise acts like a price ceiling and creates a situation where quantity demanded often exceeds quantity supplied. As Russia and China made a transition toward more market-oriented economies, they also experienced outbursts of inflation, although we should regard the statistics for these economies as somewhat shakier. Inflation in China averaged about 10% per year for much of the 1980s and early 1990s, although it has dropped off since then. Russia experienced hyperinflation—an outburst of high inflation—of 2,500% per year in the early 1990s, although by 2006 Russia’s consumer price inflation had dipped below 10% per year, as (Figure) shows. The closest the United States has ever reached hyperinflation was during the 1860–1865 Civil War, in the Confederate states. 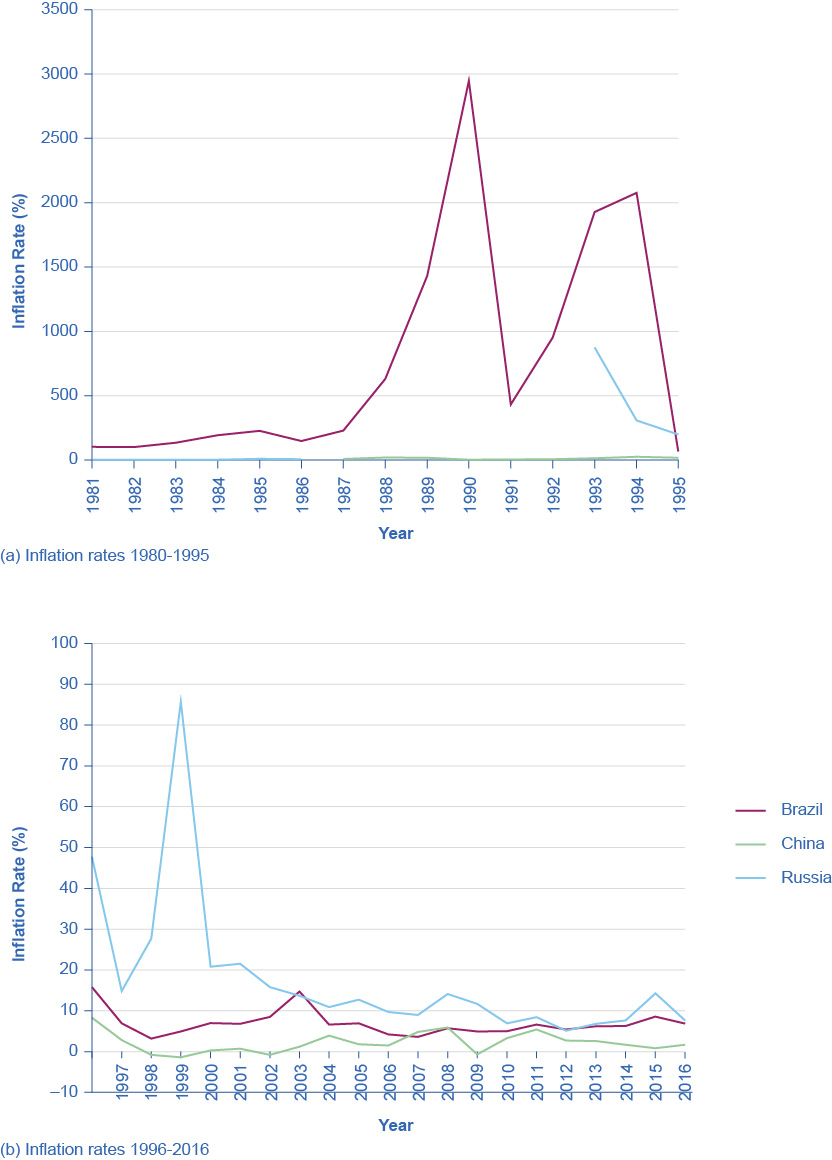 In the early 2000s, the problem of inflation appears to have diminished for most countries, at least in comparison to the worst times of recent decades. As we noted in this earlier Bring it Home feature, in recent years, the world’s worst example of hyperinflation was in Zimbabwe, where at one point the government was issuing bills with a face value of $100 trillion (in Zimbabwean dollars)—that is, the bills had $100,000,000,000,000 written on the front, but were almost worthless. In many countries, the memory of double-digit, triple-digit, and even quadruple-digit inflation is not very far in the past.

In the U.S. economy, the annual inflation rate in the last two decades has typically been around 2% to 4%. The periods of highest inflation in the United States in the twentieth century occurred during the years after World Wars I and II, and in the 1970s. The period of lowest inflation—actually, with deflation—was the 1930s Great Depression.

Go to this website for the Purchasing Power Calculator at MeasuringWorth.com. How much money would it take today to purchase what one dollar would have bought in the year of your birth?

The calculator requires you to input three numbers:

What has been a typical range of inflation in the U.S. economy in the last decade or so?

Over the last century, during what periods was the U.S. inflation rate highest and lowest?

Why do you think the U.S. experience with inflation over the last 50 years has been so much milder than in many other countries?

Within 1 or 2 percentage points, what has the U.S. inflation rate been during the last 20 years? Draw a graph to show the data.

deflation
negative inflation; most prices in the economy are falling