We can use the AD/AS model to illustrate both Say’s law that supply creates its own demand and Keynes’ law that demand creates its own supply. Consider the SRAS curve’s three zones which (Figure) identifies: the Keynesian zone, the neoclassical zone, and the intermediate zone. 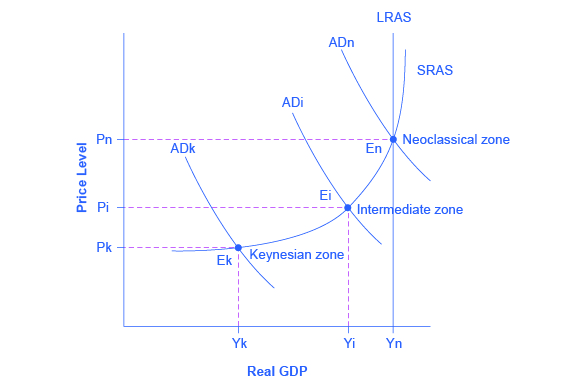 Finally, consider the SRAS curve’s intermediate zone in (Figure). If the AD curve crosses this portion of the SRAS curve at an equilibrium point like Ei, then we might expect unemployment and inflation to move in opposing directions. For instance, a shift of AD to the right will move output closer to potential GDP and thus reduce unemployment, but will also lead to a higher price level and upward pressure on inflation. Conversely, a shift of AD to the left will move output further from potential GDP and raise unemployment, but will also lead to a lower price level and downward pressure on inflation.

This approach of dividing the SRAS curve into different zones works as a diagnostic test that we can apply to an economy, like a doctor checking a patient for symptoms. First, figure out in what zone the economy is. This will clarify the economic issues, tradeoffs, and policy choices. Some economists believe that the economy is strongly predisposed to be in one zone or another. Thus, hard-line Keynesian economists believe that the economies are in the Keynesian zone most of the time, and so they view the neoclassical zone as a theoretical abstraction. Conversely, hard-line neoclassical economists argue that economies are in the neoclassical zone most of the time and that the Keynesian zone is a distraction. The Keynesian Perspective and The Neoclassical Perspective should help to clarify the underpinnings and consequences of these contrasting views of the macroeconomy.

We can explain economic fluctuations, whether those experienced during the 1930s Great Depression, the 1970s stagflation, or the 2008-2009 Great Recession, can be explained using the AD/AS diagram. Short-run fluctuations in output occur due to shifts of the SRAS curve, the AD curve, or both. In the case of the housing bubble, rising home values caused the AD curve to shift to the right as more people felt that rising home values increased their overall wealth. Many homeowners took on mortgages that exceeded their ability to pay because, as home values continued to rise, the increased value would pay off any debt outstanding. Increased wealth due to rising home values lead to increased home equity loans and increased spending. All these activities pushed AD to the right, contributing to low unemployment rates and economic growth in the United States. When the housing bubble burst, overall wealth dropped dramatically, wiping out the recent gains. This drop in home values was a demand shock to the U.S. economy because of its impact directly on the wealth of the household sector, and its contagion into the financial that essentially locked up new credit. The AD curve shifted to the left as evidenced by the Great Recession’s rising unemployment.

Understanding the source of these macroeconomic fluctuations provided monetary and fiscal policy makers with insight about what policy actions to take to mitigate the impact of the housing crisis. From a monetary policy perspective, the Federal Reserve lowered short-term interest rates to between 0% and 0.25 %, to loosen up credit throughout the financial system. Discretionary fiscal policy measures included the passage of the Emergency Economic Stabilization Act of 2008 that allowed for the purchase of troubled assets, such as mortgages, from financial institutions and the American Recovery and Reinvestment Act of 2009 that increased government spending on infrastructure, provided for tax cuts, and increased transfer payments. In combination, both monetary and fiscal policy measures were designed to help stimulate aggregate demand in the U.S. economy, pushing the AD curve to the right.

While most economists agree on the usefulness of the AD/AS diagram in analyzing the sources of these fluctuations, there is still some disagreement about the effectiveness of policy decisions that are useful in stabilizing these fluctuations. We discuss the possible policy actions and the differences among economists about their effectiveness in more detail in The Keynesian Perspective, Monetary Policy and Bank Regulation, and Government Budgets and Fiscal Policy.

We can divide the SRAS curve into three zones. Keynes’ law says demand creates its own supply, so that changes in aggregate demand cause changes in real GDP and employment. We can show Keynes’ law on the horizontal Keynesian zone of the aggregate supply curve. The Keynesian zone occurs at the left of the SRAS curve where it is fairly flat, so movements in AD will affect output, but have little effect on the price level. Say’s law says supply creates its own demand. Changes in aggregate demand have no effect on real GDP and employment, only on the price level. We can show Say’s law on the vertical neoclassical zone of the aggregate supply curve. The neoclassical zone occurs at the right of the SRAS curve where it is fairly vertical, and so movements in AD will affect the price level, but have little impact on output. The intermediate zone in the middle of the SRAS curve is upward-sloping, so a rise in AD will cause higher output and price level, while a fall in AD will lead to a lower output and price level.

If the economy is operating in the neoclassical zone of the SRAS curve and aggregate demand falls, what is likely to happen to real GDP?

Since the SRAS curve is vertical in the neoclassical zone, unless the economy is bordering the intermediate zone, a decrease in AS will cause a decrease in the price level, but no effect on real economic activity (for example, real GDP or employment).

If the economy is operating in the Keynesian zone of the SRAS curve and aggregate demand falls, what is likely to happen to real GDP?

Because the SRAS curve is horizontal in the Keynesian zone, a decrease in AD should depress real economic activity but have no effect on prices.

What is the intermediate zone of the SRAS curve? Will a rise in output be accompanied by a rise or a fall in the price level in this zone?

Why might it be important for policymakers to know which in zone of the SRAS curve the economy is?

In your view, is the economy currently operating in the Keynesian, intermediate or neoclassical portion of the economy’s aggregate supply curve?