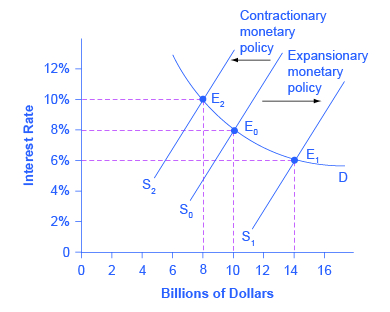 If the economy is suffering a recession and high unemployment, with output below potential GDP, expansionary monetary policy can help the economy return to potential GDP. (Figure) (a) illustrates this situation. This example uses a short-run upward-sloping Keynesian aggregate supply curve (SRAS). The original equilibrium during a recession of E0 occurs at an output level of 600. An expansionary monetary policy will reduce interest rates and stimulate investment and consumption spending, causing the original aggregate demand curve (AD0) to shift right to AD1, so that the new equilibrium (E1) occurs at the potential GDP level of 700. 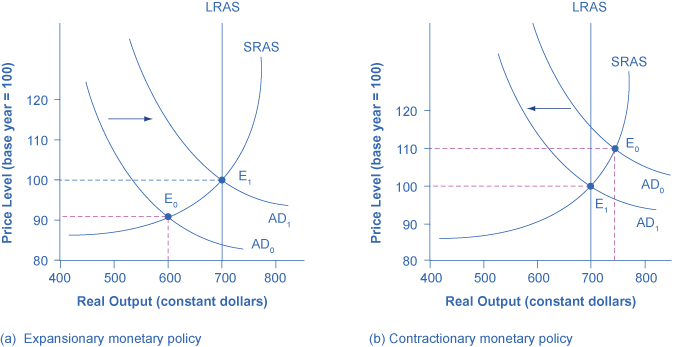 Conversely, if an economy is producing at a quantity of output above its potential GDP, a contractionary monetary policy can reduce the inflationary pressures for a rising price level. In (Figure) (b), the original equilibrium (E0) occurs at an output of 750, which is above potential GDP. A contractionary monetary policy will raise interest rates, discourage borrowing for investment and consumption spending, and cause the original demand curve (AD0) to shift left to AD1, so that the new equilibrium (E1) occurs at the potential GDP level of 700.

For the period from the mid-1970s up through the end of 2007, we can summarize Federal Reserve monetary policy by looking at how it targeted the federal funds interest rate using open market operations.

Of course, telling the story of the U.S. economy since 1975 in terms of Federal Reserve actions leaves out many other macroeconomic factors that were influencing unemployment, recession, economic growth, and inflation over this time. The nine episodes of Federal Reserve action outlined in the sections below also demonstrate that we should consider the central bank as one of the leading actors influencing the macro economy. As we noted earlier, the single person with the greatest power to influence the U.S. economy is probably the Federal Reserve chairperson. 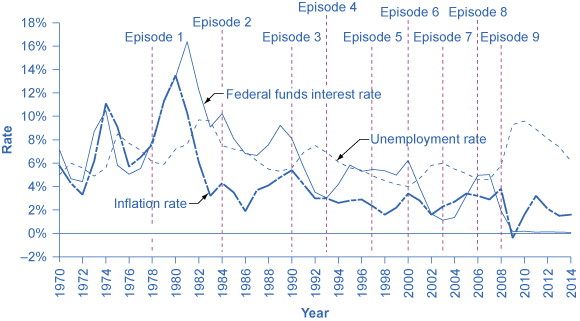 In Episode 2, when economists persuaded the Federal Reserve in the early 1980s that inflation was declining, the Fed began slashing interest rates to reduce unemployment. The federal funds interest rate fell from 16.4% in 1981 to 6.8% in 1986. By 1986 or so, inflation had fallen to about 2% and the unemployment rate had come down to 7%, and was still falling.

In Episodes 7 and 8, the Federal Reserve conducted a loose monetary policy and slashed the federal funds rate from 6.2% in 2000 to just 1.7% in 2002, and then again to 1% in 2003. They actually did this because of fear of Japan-style deflation. This persuaded them to lower the Fed funds further than they otherwise would have. The recession ended, but, unemployment rates were slow to decline in the early 2000s. Finally, in 2004, the unemployment rate declined and the Federal Reserve began to raise the federal funds rate until it reached 5% by 2007.

The most powerful and commonly used of the three traditional tools of monetary policy—open market operations—works by expanding or contracting the money supply in a way that influences the interest rate. In late 2008, as the U.S. economy struggled with recession, the Federal Reserve had already reduced the interest rate to near-zero. With the recession still ongoing, the Fed decided to adopt an innovative and nontraditional policy known as quantitative easing (QE). This is the purchase of long-term government and private mortgage-backed securities by central banks to make credit available so as to stimulate aggregate demand.

Quantitative easing differed from traditional monetary policy in several key ways. First, it involved the Fed purchasing long term Treasury bonds, rather than short term Treasury bills. In 2008, however, it was impossible to stimulate the economy any further by lowering short term rates because they were already as low as they could get. (Read the closing Bring it Home feature for more on this.) Therefore, Chairman Bernanke sought to lower long-term rates utilizing quantitative easing.

We usually think of the quantitative easing policies that the Federal Reserve adopted (as did other central banks around the world) as temporary emergency measures. If these steps are to be temporary, then the Federal Reserve will need to stop making these additional loans and sell off the financial securities it has accumulated. The concern is that the process of quantitative easing may prove more difficult to reverse than it was to enact. The evidence suggests that QE1 was somewhat successful, but that QE2 and QE3 have been less so.

Why does contractionary monetary policy cause interest rates to rise?

Contractionary policy reduces the amount of loanable funds in the economy. As with all goods, greater scarcity leads a greater price, so the interest rate, or the price of borrowing money, rises.

Why does expansionary monetary policy causes interest rates to drop?

An increase in the amount of available loanable funds means that there are more people who want to lend. They, therefore, bid the price of borrowing (the interest rate) down.

How do the expansionary and contractionary monetary policy affect the quantity of money?

How do tight and loose monetary policy affect interest rates?

Which kind of monetary policy would you expect in response to high inflation: expansionary or contractionary? Why?

Explain how to use quantitative easing to stimulate aggregate demand.

A well-known economic model called the Phillips Curve (discussed in The Keynesian Perspective chapter) describes the short run tradeoff typically observed between inflation and unemployment. Based on the discussion of expansionary and contractionary monetary policy, explain why one of these variables usually falls when the other rises.