One thing evident as you travel through the state of Washington is the variety of landscapes and ecosystems you will encounter.  In a few hours, starting from the Pacific Ocean beaches of Western Washington, you can travel east through dense evergreen forests, through high mountain passes with glaciers, to the dry hills and plateaus of Eastern Washington.  This state has distinct geographic regions and geological formations that will be explored in this lesson.

Various sources focused on Washington state geographic regions describe the regions in similar manner, but they may divide the state in different numbers of regions, from 5 regions to 7 regions. 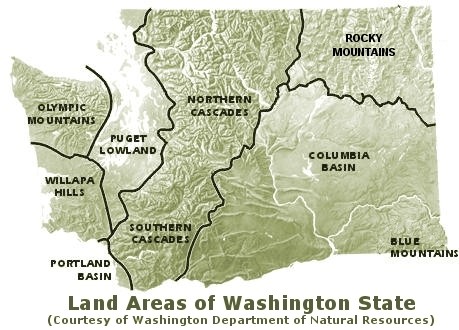 Dale Lambert, in his textbook, The Pacific Northwest: Past, Present, and Future, has 5 similar divisions and descriptions for this state:

Here is a summary of Lambert’s descriptions of the state’s regions.

This is the long and narrow area of the state bordering the Pacific Ocean from the Strait of Juan de Fuca and Olympic Peninsula to the mouth of the Columbia River near Long Beach, Washington. The area includes the rain forests and high mountains of the Olympic Peninsula to the wide and sandy beaches from Ocean Shores to the mouth of the Columbia River.  Fishing, lumber, recreation, and shipping have been the traditional industries in this sparsely populated region.

This is another narrow region about 50 miles wide located between the Coastal region and the Cascade Mountains.  It extends from the Bellingham/Canadian border area to the end of Puget Sound in the Olympia region and south to less populated river valleys of the Chehalis and Cowlitz Rivers.. It is the most densely populated region of the state with Seattle, Everett, and Tacoma as centers of commerce.  It is a hilly area ranging from sea level to 1,000 feet with exposure to salt water on the shores of Puget Sound. Economic growth has been strongest in this region that has been transitioning from lumber and fishing to aerospace related businesses, and computer technology and related commerce.

To the east of the Western Lowlands, running north and south is the Cascade Range.  This range originates in southern British Columbia and stretches through Oregon into Northern California. Mountains in the Cascades average 6,000 feet in height and the range has 5 volcanoes in Washington state: Mt. Baker, Glacier Peak, Mt. Rainier, Mt. Adams, and Mt. St. Helens. The Cascades are a natural barrier between the moist and mild climate of Western Washington and the extreme and very dry Eastern Washington climate.  Sparsely populated, forestry, mining and recreation have been traditional industries in the Cascades.  Because of high amounts of rain and snow in the mountains, the Cascade Range is a major water storage area for the needs of people and industries on both sides of the state.

East of the Cascade Mountains, this is the largest geographical region in the state and it is the world’s second largest lava plateau, second to the Deccan Plateau in India. This huge lava plateau is a result of at least 55 different lava flows 10 to 15 million years ago.  The Columbia River and Snake River both run through the Columbia Plateau providing irrigation water for farming a variety of crops such as wheat, grapes, and potatoes, and fruit trees such as apples and cherries.  Although temperatures fall below freezing in the winter months, summer often brings temperatures to 100 degrees.  It has a semiarid climate that is more extreme than the Coastal and Western Lowland regions. Eastern Washington is more sparsely populated, but there are major population centers: Spokane, the Tri-Cities, Wenatchee, Moses Lake, and Yakima. While agriculture dominates as the main economic driver of the region, manufacturing, high technology, food processing, mining, and recreation are important to the regional economy.  This region has abundant hydroelectric power because of the Grand Coulee Dam and other dams on the Columbia River, and this has attracted manufacturing businesses to the Columbia Plateau.

The Rocky Mountains region is north and east of the Columbia Plateau.  Although the Rocky Mountains range along the west from Canada to the border of Mexico, the Rockies in Washington are a very small segment of this vast mountain range.  The mountains range in altitude from 4,000 to nearly 10,000 feet.  This region is isolated and rugged with long, cold winters and short, cool summers. These mountains also receive less rain than the Olympic and Cascade Mountains, but the rainfall here is higher than the adjacent Columbia Plateau.  Because of these factors, it is sparsely populated. Communities of the region, Omak, Okanogan, and Colville, are supported by lumber, mining and recreation activities.

Washington’s distinct geographic regions reflect an exciting geologic history.  David Tucker in Geology Underfoot in Western Washington describes Western Washington geology as dynamic, with active volcanoes, glaciers, and ancient and active faults. He points out the importance of the Cascadia Subduction Zone where the Juan de Fuca Tectonic Plate moves eastward to meet the North American Tectonic Plate 80 miles off the Washington State coast.  For over 40 million years, our volcanoes in the Cascade Range have grown and erupted because of the plates’ movements in the Cascadia Subduction Zone.  Earthquake activity, a result of the movement of these tectonic plates, has occurred over millions of years, and earthquakes continue to threaten disaster as the population of Western Washington has grown the last 100 years.

In Whatcom County, a trip up the Mt. Baker Highway to the Mt. Baker ski area and Artist Point is a fabulous place to visit a volcano, Mt. Baker, and observe the area glaciers and lava fields.  It is a magnificent place to take in these magnificent features of geology.

According to the authors of Washington Rocks! A Guide to Geologic Sites in the Evergreen State, the vast Columbia Plateau began to be covered with layers of lava from volcanic eruptions 17 million years ago.  This unique landscape was scoured and scraped by giant ice sheets. Affecting the region as well, were a series of immense floods caused when parts of ice sheets and ice dams warmed up and released enormous amounts of fast flowing water from Western Montana, over the Columbia Plateau, and down the Columbia River as it forms our border with Oregon, ending in the Willamette Valley in Western Oregon.  The distinct coulees and channeled scablands of Eastern Washington were formed during these flood episodes. The floods are referred to as the Missoula Floods and Spokane Floods.

The video (The Great Floods:  Cataclysms of the Ice Age) gives an excellent visual account of these floods and their effects on the distinct geology of Eastern Washington.